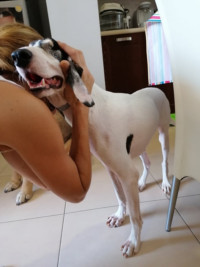 Mona is a female Pointer cross estimated to be born June 2016, admitted June 2021.
Mona was seen trying to stay alive in the middle of the road when a driver honked at her, startling her and sending her down a cliff. She sat there shivering and sore until rescuers made their way down the cliff to secure her. When they got close enough they realized Mona was blind

. One eye is was missing and our vets tried hard to save the other one but unfortunately that one had to be removed also. She was covered in ticks and fleas, her nails were overgrown and was emaciated but the minute she felt a kind hand and a soft voice she wagged her tail.
She was also diagnosed with leishmania and as soon as she finished her treatment, she went to a foster home.